This holiday, while family and friends ate good food and played Super Mario Bros. Wii, I found myself holed up in my office working on a small passion project called Nottingham. (Ok, I ate some food, too.) I wrote briefly about Nottingham last week, but wanted to take a few minutes to go into a bit more detail as it's grown up a lot these last few days.

Above all things, Nottingham is a clone of the classic Mac application Notational Velocity. And I'm serious when I say that -- I didn't start out to write an app like NV, I started out with the intention of literally copying what they had created and then improving upon it. To merit creating such a similar app, my improvements had to be worthwhile. I started out with four goals.

First, it had to have a cleaner, more Mac-like UI. Notational Velocity's current interface is purely functional. It's efficient and stays out of your way. Unfortunately, it's ugly, too. It no longer fits in with the UI polish users expect in 2009. I'm not a designer by any stretch of the imagination, but I did make some common sense changes that make the interface friendlier. I replaced the current search box with a native Mac search field and removed any unnecessary padding around the UI elements. I gave the note field a legal pad treatment (inspired by The Hit List), enabled rich text editing, and replaced the "Date Created" column with a more useful "Date Modified" one. Also, since the goal of Nottingham (and NV) is to be totally keyboard navigable, I put a lot of thought into which shortcut keys I kept and which ones I altered. One of those changes was making the up and down arrow keys behave more naturally as they move through the list of notes and into / out of the search field. 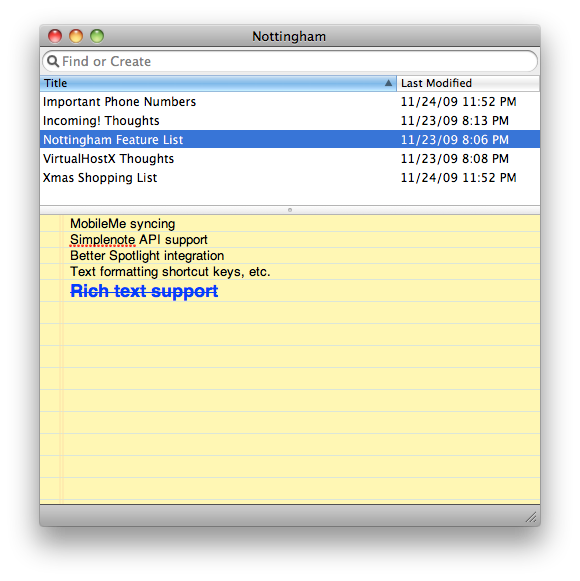 Your data is precious. That's why the second major focus of Nottingham was enabling sync support to keep your notes safe. I went two routes with this. First, I made Nottingham sync with MobileMe. This not only keeps your data backed up in Apple's cloud, but it makes it available to you on all of your Macs. Unfortunately, MobileMe is a $99/year service that not everyone has, which is why Nottingham offers a second option to sync with Cloud Factory's awesome Simplenote service. This gives you access to your notes from any computer via their web interface and on-the-go access with their kick-ass iPhone application. Any changes you make on your Mac will by synced over the air to your phone and vice-versa.

Finally, to give you access to your notes even when Nottingham isn't open, I enabled Spotlight indexing. This makes it a snap to find what you're looking for no matter where you are on your Mac.

And that's about it. Nottingham is still very much a work in progress, but I think you'll find it's already stable and useful enough for everyday use. It's quickly become a staple icon in my Dock. If, during your use, you find any bugs (which I'm sure there are) or have suggestions for improving it, please don't hesitate to get in touch.

You can download the latest version of Nottingham here.